An Evening with the Maori in New Zealand

You are here: Home / Oceania Travel / New Zealand / An Evening with the Maori in New Zealand

From the moment you step off the plane in New Zealand you feel the culture. The island is brimming with history from one end to the other.  The influence of the Maori is easily seen so it wasn’t hard for us to decide we wanted to take a closer look at their culture.

The Tamaki Maori Village in Rotorua is the perfect place to visit if you are looking for a cultural experience and a way to understand the native people of New Zealand. From the moment you step into their office to the large feast they serve you, you will be taken into their way of life.

After spending the day in Rotorua relaxing we made our way to the Tamaki office in the downtown. Retrieving our tickets was a breeze and we waited in their lounge area for our bus to arrive.  Unlike many commercial cultural things, the Maori village is not located in town. 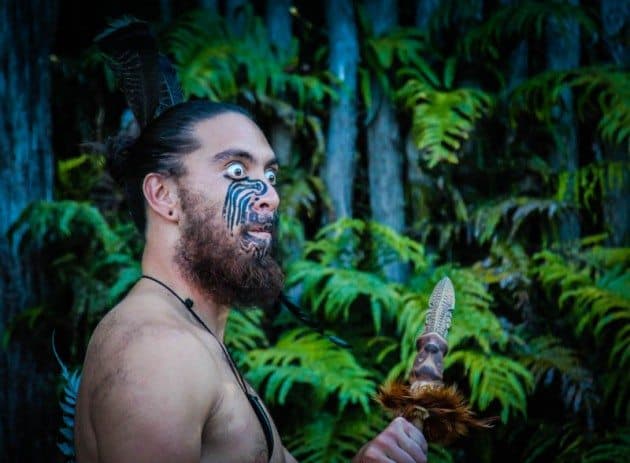 From the main office you board your bus and you are whisked right into the culture with an animated bus driver of Maori heritage. He takes you on a journey through time while he gives you a thorough introduction for your evening and explains how your night will start.

We are asked to elect a chief on the bus. Our chief will represent our visiting tribe and participate in the welcoming demonstration when we arrive at the village.  The driver tells us we must elect an older man that will reflect the leadership of our group.

When we arrive at the village we are told to watch carefully for the tribe warriors to exit the village into the welcoming area and challenge our chiefs. The Maori were fierce warriors and frequently put on intimidating displays to all strangers that neared their village borders. 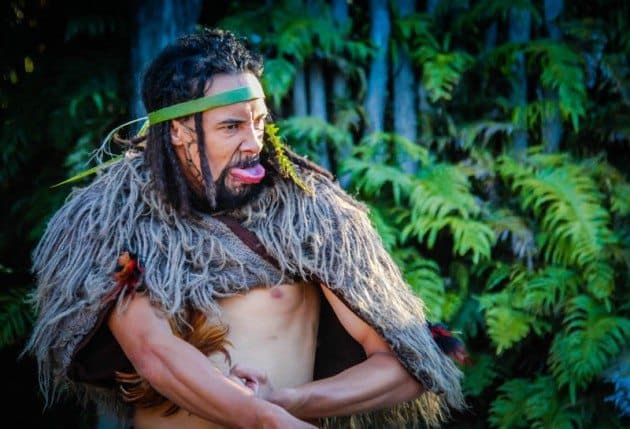 With serious faces, we are told not to laugh or point, we watched the tradition come to life. The first warrior came from behind the trees and challenged our newly elected chief with a display of warrior moves and tactics. If this wasn’t enough to alarm you, a second warrior came out, a little more intimidating than the first.

He continued with the display of widened eyes, tongue out and loud spitting noises.  The third emerged shortly later with a similar display of territory protection and placed a small fern in front of our chief. 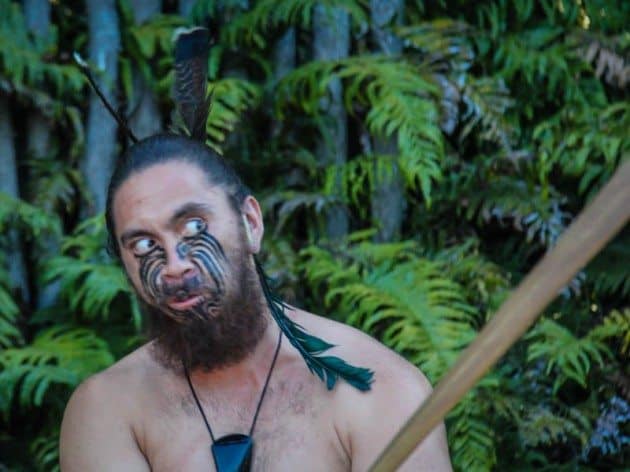 As a token of acceptance, he bent down, grabbed the leaf and backed away slowly. This was to signal to the tribe that we were there in peace, not war. Which is a good thing, because the Maori were known to be cannibalistic when they were first encountered in New Zealand. They ate many people that tried to communicate with their tribes.

After smooth sailing through the intimidating warrior performance, we were invited into the village. We spent our time moving amongst the village and visiting the stations that were setup to educate us about the Maori way of life.

From warrior training, dance, weaving, to art, we were shown how they survived and bred their culture. I couldn’t help but notice the amazing tattoos that many of them held. The Maori people tattooed to show various achievements within their tribes. 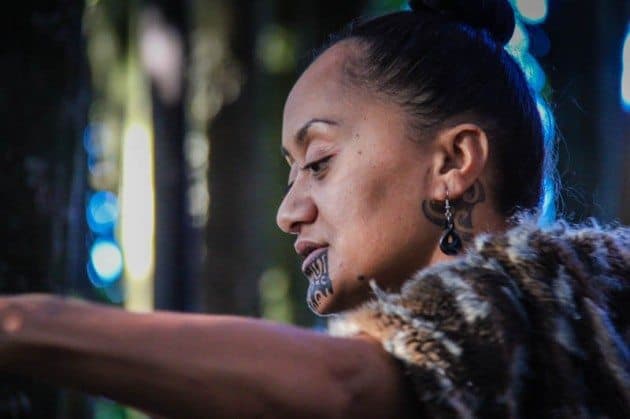 Each tattoo depicts something that has been earned. Tattooing isn’t a recreation in this culture so it was fascinating to see some of the real tattoos the Maori descendants hold on their bodies. That said, not even the face is left out for tattoo display.

After taking some time to visit the areas in the village we made our way into their ancestral meetinghouse where we treated to various performance from song and dance to warrior rituals. You couldn’t help but get goose bumps as you watched their dedication to showing you the Maori culture.

The evening continued with a visit to the Hangi pits, where we were shown how they used the earth to prepare their food. Because Rotorua is a volcanic region, the Maori used this to their advantage by gathering the hot rocks, digging a hole in the earth, placing the food in the hole and then covering it with layers of thatch and hot rocks. Water was added to aid in the cooking and create steam. 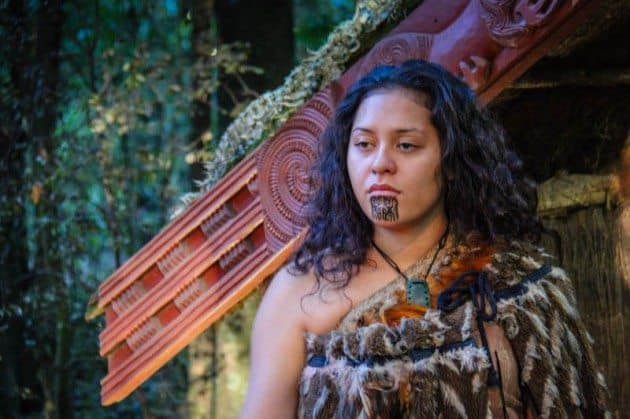 What comes next is a gigantic Hangi feast. You have the opportunity to partake in a delicious meal that has been prepared the traditional Maori way. The meal is nothing short of excellent and the perfect culmination to an amazing evening with the Maori.

Just when you think the night is over, you hop back on the bus for a ride back into Rotorua with your ever entertaining bus driver who leads sing alongs based on songs from the countries of the people on the bus. The whole experience is nothing short of a good time and something I would highly recommend on your next visit to Rotorua. 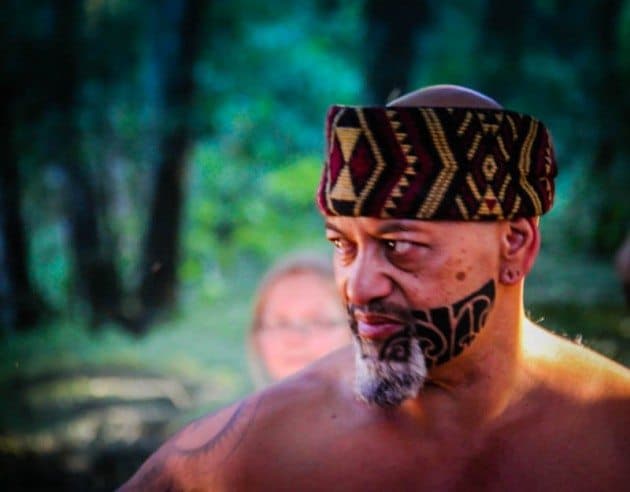 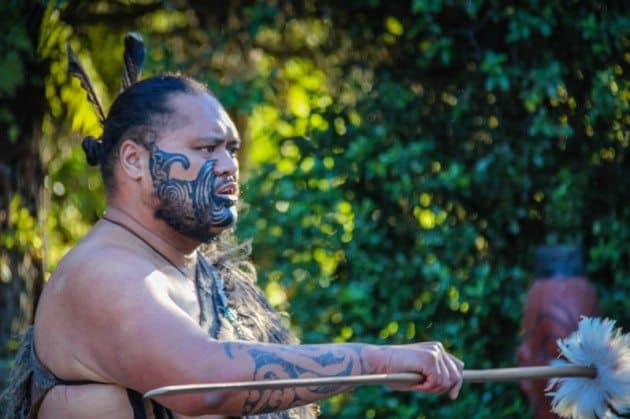 Disclosure: We were guests of Tamaki Maori Village. All opinions are 100% mine. Photos and videos by Divergent Travelers.