11 Superb Things to Do in Marrakech

You are here: Home / Africa Travel / 11 Superb Things to Do in Marrakech

Countless cafes line the streets offering plenty of opportunities to stop, refresh and refuel before continuing your exploration. And in the spirit of discovery, here are some of the best things to do in Marrakech that you can make a note of for when you visit this magical city.

Marrakech is possibly the most touristic city in the North African country of Morocco. The country has a long history that combines local Berber culture, Arab Islamic traditions, European architecture and a legacy of French colonialism, making for a fascinating city in the shape of Marrakech.

One of the four old historical capitals of Morocco, Marrakech is steeped in history and is rewarding to explore as a result, with tombs, mosques and old fortresses scattered around its streets, there is more than enough historical things to do in Marrakech.

Perhaps more than its history, Marrakech is well-known for its medina quarter, which is a place to simply get lost in. Markets upon markets line its labyrinthine alleyways, a warren of passages that sometimes end up on the outskirts of someone’s house and sometimes opens up into a new square to discover it filled with a different specialty item.

11 Best Things to do in Marrakech

The Koutoubia Mosque is the greatest mosque in all of Marrakech and along with the Kasbah Mosque is one of the most important historical mosques in the city. It is known by many different spellings of the same word, koutoubiyyin, which means in Arabic ‘booksellers’.

It gets this epithet from the venerable tradition of the market of mainly, booksellers located in the souk nearby.

Koutoubia Mosque was built during the reign of Berber Almohad Caliph Yaqub al-Mansur in the late 12th century and has inspired many other buildings since, including Moroccan capital Rabat’s Hassan Tower, and the iconic Giralda of Seville in Spain.

Comprising a plaza and gardens, the mosque is floodlit at night but makes for a beautiful sight at any time of the day.

Also located near the Kasbah Mosque is the most famous of Marrakech’s 19 gates: the Bab Agnaou. Embedded in the old city walls, the gate itself dates back from the 12th century Almohad dynasty and was used as the royal entrance to the city since it leads straight into the city’s kasbah.

The word agnaou is thought to mean ‘deaf man’ in the Berber language, used to refer to those who cannot understand Berber; given that this gate is south-facing, it is widely believed that this is in reference to sub-Saharan Africans.

Like many gates of its kind, it is horseshoe-shaped, and features floral decorations extending from the corners of a shell; elsewhere, inscriptions from the Quran can be spotted in intricate Arabic calligraphy.

So named for the fact that it is located in Marrakech’s kasbah, the old citadel or fortress area of the city. This is, alongside the Koutoubia Mosque, one of the most important mosques and things to do in Marrakech. Kasbah Mosque originally served as the city’s ‘Friday Mosque’, the main mosque for Friday prayers.

Also known under the names of the Mansouria Mosque or Mosque of Moulay al-Yazi, this building is still in use today, although non-Muslims are not permitted inside (as with other mosques in Morocco and other Maghreb countries).

However, it is easy to stand outside and admire the flawless architecture, the carved decorations, and splashes of brilliant blue, that make this such a beautiful building.

Located on the south side of the Kasbah Mosque is a narrow necropolis, essentially a graveyard, that is home to the ornate mausoleums known today as the Saadian Tombs.

These monumental structures are the stunning final resting places of the members of rulers of the Saadian Dynasty, who took charge of Morocco between 1549 and 1659.

There are thought to be around 60 members of the Saadian family interred here, but most famous of all is the tomb for Ahmad al-Mansur and his family; the monuments are made from Italian Carrara marble, and fine stucco and cedarwood comprise the stele.

In fact, all of the Saadian Tombs are renowned for the beauty of their decoration and therefore have become an important tourist destination in their own right.

Plan your own adventure in Morocco: 15 Day Morocco Encompassed

If you are looking for opulent splendor and decadence, then you need to look no further than this stunning example of regal architecture.

The Bahia Palace – ‘Bahia’ meaning ‘brilliance’ in Arabic – took 14 years to build but, with the greatest artisans of the time at work on this palace and garden complex, the results made the long wait worth it.

Built-in the 19th century, the palace was intended to be the most spectacular of its day and it still impresses today.

One of the most visited sights in all of Morocco, the Jardin Majorelle was created by landscape painter Jacques Majorelle.

It features his ville nouvelle style villa and a number of well-placed plants in its famous garden: bright fuchsia bougainvillea, green palms, stark cacti and all often against colorful backdrops or in bright planters.

The next owners were Yves Saint Laurent, and his partner Pierre Bergé, who saved the gardens from disrepair; Yves’ ashes are actually scattered in the beautiful rose garden.

Aside from the stunning gardens, there’s also a fascinating Berber Museum to discover here.

Plan your own adventure in Morocco: 15 Day Morocco Encompassed

To relive and revive some semblance of what the French colonial atmosphere of Marrakech would have been like, you can always spend an evening at Le Grand Café de la Poste.

Located in the Gueliz district of the city – which is worth visiting in its own right for a completely different perspective of Marrakech life, this recently renovated establishment offers up a slice of Moorish design with colonial spirit, offering a place to eat good food and drink in a sophisticated pub-style atmosphere until late.

Decorated with palms, black and white floor tiles, opulent early 20th century furnishings and other touches of opulence, Le Grand Café de la Poste is like stepping back in time, if only for a night.

For a comprehensive guide through the ages of the art of Marrakech then you should pay a visit to the Marrakech Museum. Not only is its collection worth a look, but it is also housed in a spectacular building: the Dar Menebhi Palace, constructed in the 19th-century, is a work of art in itself.

A great example of classic Moorish architecture, the palace features a central courtyard complete with fountains, a hammam (Turkish bath), common seating areas, and much decoration in the form of mosaic and intricate carvings.

Alongside displays of traditional and contemporary Moroccan art, there are also historical coins, books, and other items exhibited, illustrating Berber, Islamic and Jewish cultures.

This is a museum dedicated to the lesser-known relative of Morocco’s famous rugs called boucherouite. These are by no means the opulently patterned silk carpets that the country is known for; instead, the Berber boucherouite are made of discarded rags and offcuts woven together as they are for a multicolored sensation of a rug.

This is the original recycling or even upcycling and it’s all on show at the collection of avid fan Patrick de Maillard, who has also collated other Moroccan items of functional decoration, including old painted doors and agricultural implements.

If that’s not enough, then you should know that this lovely museum is housed in a beautiful 18th-century riad that serves refreshments on an upstairs terrace, too.

Away from the more touristy markets around the Jemaa el-Fnaa, this market within a market is the place to browse and purchase items made by, and for, a younger slice of Marrakech’s population.

The Souk Cherifa is housed in a converted fondouk which loosely translated from Arabic means ‘hotel’ but would have included stables as well as accommodation and is the place to go for contemporary items as opposed to tourist trinkets.

You can pick up top-quality embroidered linens at La Maison Bahira, kaftans and clutch-bags made out of old carpets at Khmissa, or even argan oil and other beauty products over at Arganino.

This alternative to the usual sometimes overwhelming souks of Marrakech is fast becoming known as the home of bohemian fashion in the city so fashionistas better note this one down as one of your things to do in Marrakech.

This is the main square in Marrakech, a meeting place for locals, a marketplace for orange juice stalls, an open-air circus where there are snake charmers and men with macaques on their shoulders.

It’s a little bit of everything and that’s what makes it such a draw for tourists and the inhabitants of Marrakech themselves.

At night the square makes way for a multitude of food stalls as it attracts the peak crowds of the day, looking to get a tasty bite to eat and something refreshing to drink.

In the day, after you’re done exploring the market or after you’ve run out of steam, sit on one of the terraces that surround the square and simply watch this amazing hive of activity unfold with a glass or two of sweet mint tea. 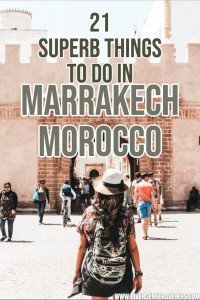