Sydney is a definite do not miss on any visit to Australia, so you can imagine that we were quite excited to visit the famous city. With our excitement came some anxiety because we were traveling the country in a camper van and the thought of dealing with Sydney traffic was enough to make us sweat. This was paired with the frustration and anxiety of finding parking.

Top this all off with a very sketchy weather forecast for the days we would be there. We just couldn’t seem to shake the rain that was following us up the coast. After giving us 3 days of rain in Jervis Bay, we were really hoping for some clear weather. Unfortunately, this wouldn’t be the case on our Sydney visit.

The first day we visited the city, it literally down poured. Imagine our first glimpse of the Sydney Opera House being serenaded by a thunderstorm. I decided to put together a highlight reel of what it was like visiting Sydney while Mother Nature was being bipolar. 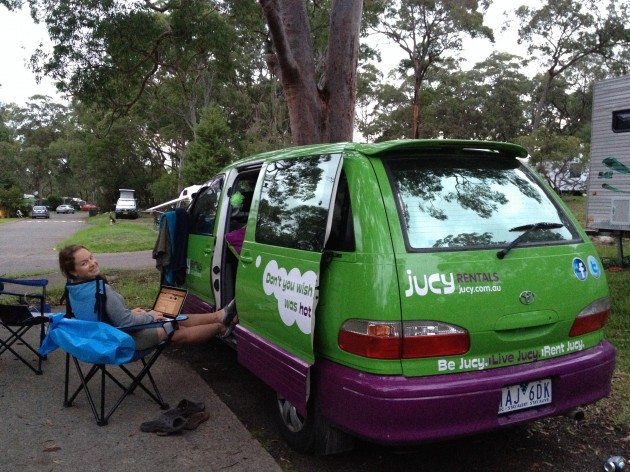 Ideally we wanted to stay in our van, but we needed to make sure we were close enough to public transportation so we wouldn’t have to worry about driving our van into the city and paying loads of money for parking. This wasn’t an easy task. Luckily, I stumbled on a website that touted the Lane Cove River Tourist Park as the place to camp within the city limits of Sydney.

After some research I learned that the campsite is literally in the suburbs of Sydney, near North Ryde. The subway stop was a 10 minute walk from the campground and would have you smack dab in the CBD in 30 minutes.  Metro tickets cost us $6 each for a return that lasted all day. You can’t really beat that.

The campground itself was set in a nice area with plenty of wildlife roaming in, out and around the grounds. The amenities were good and for a $39AUD per night powered camping site, you couldn’t go wrong. We enjoyed our time at the campground and would recommend it to other camper vanners looking for a place to stay and park in Sydney. 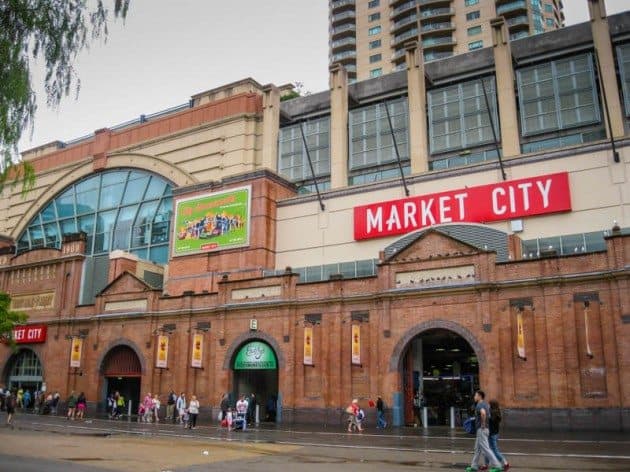 In an attempt to beat the rain, we hopped on the metro and made our way towards one of Sydney’s most popular markets, Paddy’s. This market reminded us a lot of the markets you can find in Asia and Mexico with stall after stall of vendors. You can buy just about anything you may or may not need here. The popular item of the season seemed to be the adult sized onesies.

They were everywhere and seriously hilarious. From ninja turtles to unicorns, you too could have an adult sized onesie. My favorite was the people wandering the market actually wearing them. I think I even snorted a couple times.  To boot, they were available for purchase in the stall right next to the adult bondage shop. The product here was compiled of leather lingerie and paired with creepy Halloween masks. Our visit turned out to be quite entertaining and a really great mood lifter after being chased by the heavy downpours. 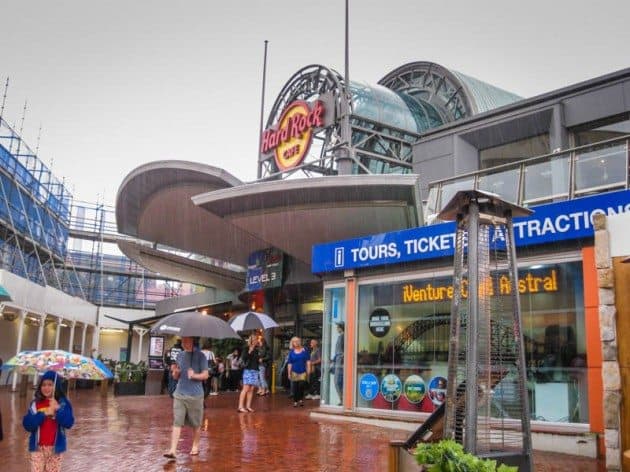 After leaving the market the skies looked as if they were going to clear so we made our way over to Darling Harbor in search of the Hard Rock Cafe.  As much as I wanted to eat here, I knew it wasn’t something that would be in our budget but I still wanted to visit the area and check it out.

The Chinese Gardens, Harbor, Hard Rock, Maritime Museum, you name it, was all non-enjoyed in the pouring rain. What appeared to be clearing up was just the eye of the storm and we were more than soaked on our attempt to see this area. The storm even chased us over to the Aquarium, Wax House and IMAX. If you can believe it, we almost gave in to temptation and went into these places. Glad we didn’t, the city was already hard on the budget without making a rain splurge. 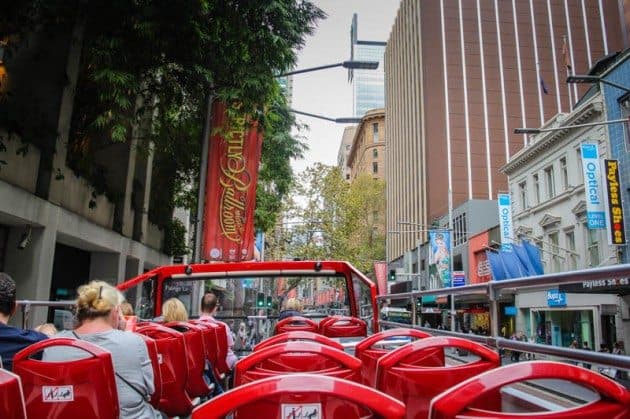 HOHO= Hop On Hop Off. This has always been one of my favorite ways to see a city. Although not always the cheapest option, you get to stay above ground and on the top of the double decker buses you get a perspective of the city you cannot find elsewhere.

They take you to the best places the city has to offer and I have some amazing city visits by utilizing these buses in many cities in Europe and the United States. So after a soaking wet first day in the city, I was hoping a splurge on the double decker bus would be a great way to kick off our second day exploring the city.

I am sorry to report that the experience we had in Sydney just did not stack up to the standard I have set for these tours. Sydney is a really great city, but I think it just lacks things to stop at. The bus seemed to have mostly made up type stops that dropped you in the middle of nowhere with not much to look at.

Top it off with unrelenting rain. When we first hopped on the bus and bought our tickets the sky was clear and the sun was shining. By the time we got to the second stop, it was down pouring. This would be the theme of the day for us and we spent too much time walking in the rain and sitting on the bottom deck of the bus. Combine that with the poor stops, it wasn’t a very fun day. 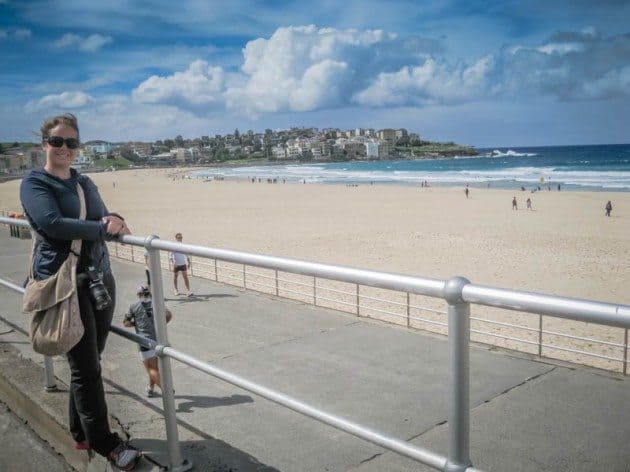 The best thing to come out of our HOHO bus experience was the Bondi Explorer extension. This allows the passengers to hop on a different bus that takes you out of the CBD and over to Bondi and the surrounding areas. Hopping on this bus allowed us, by some stroke of luck, to avoid the rain and have a pleasant sunny visit to Bondi Beach.

Bondi Beach can be compared to South Beach in Miami. It is all glitz and glamor and according to the bus tour, the place to see and be seen in Sydney. Well, we didn’t see anyone. The number of people on the beach could be counted on one hand.  Although not a big deal for us, it took some of allure out of the visit. The beach itself is quite beautiful though and it felt really nice to walk on the beach in the sunshine and then browse through the various shops that lined the main drive. 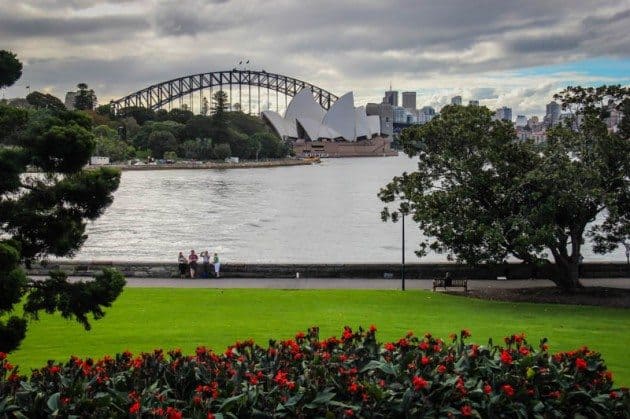 One of our highlights of Sydney was our hop off at the Royal Botanical Gardens. It actually turned out to be just as sunny and nice as Bondi Beach had been earlier in the day. The storm seemed to have cleared and we enjoyed the late afternoon wandering through the gardens.

The park that holds the gardens is free and has many trails and walking paths that take you some amazing displays of flowers and plants. To top it all off, you get some pretty amazing views of the Sydney Opera House and Harbor Bridge from the various lookouts in the garden. This was a highlight for us and it shouldn’t be missed.

Of course you can’t leave out The Rocks and the Sydney Opera House. We had a combination of rain and sun each time we viewed the Opera house and surprisingly lucked out with a beautiful clear night when we took our tour of The Rocks.