Philippines: How to Get From Manila to Puerto Galera

You are here: Home / Southeast Asia Travel / Philippines / Philippines: How to Get From Manila to Puerto Galera

Manila is a chaotic and at first glance the prospect of trying to get anywhere can be quite overwhelming. The traffic is horrendous and you’re not always given the truth when asking for help on the street.

Most people use Manila only as a hub to reach some of the gorgeous island paradises that the Philippines has on offer.

If you love to scuba dive or are interested in trying it out or taking a course, there is no doubt that you have learned about Puerto Galera. Not only does it have spectacular diving, one of the top 5 places to dive in the Philippines, but it is close to Manila and easy to reach.

As an added bonus, it is incredibly cheap to travel to this island too.

There are several options available for traveling to Puerto Galera, ranging from cheap local transport to extremely overpriced ‘tourist’ options. Don’t fall for the tourist bus scam, the local transport is perfectly safe and easy to figure out for a fraction of the price.

With this guide, you will find your way to Puerto Galera the cheapest and quickest way possible. 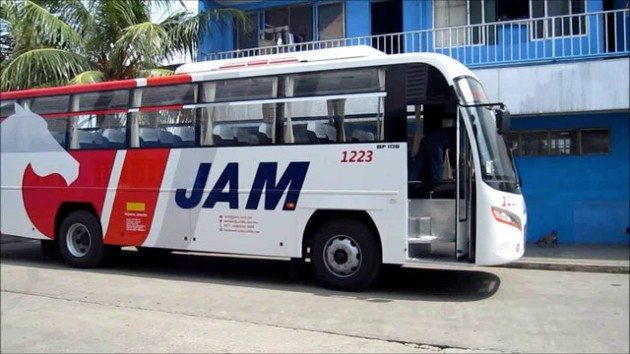 First things first, there is no need to book anything in advance. The day you want to head to Puerto Galera, just hop into a cab- make sure you tell them to use the meter!!!- and ask to be taken to Buendia Bus Station.

Let the driver know that you are taking a JAM bus and they will be sure to take you right to the bus. Don’t be alarmed if you pull up and see a JAM bus parked in front of the station, it is ok to board this bus.

No need to enter the bus station. Each bus has a conductor that is responsible for the passengers on the bus and he will sell you a ticket after the bus has left for the destination.

Be sure to board a bus that is heading to Batangas Pier via the skyway. This is important as this bus will drop you right at the pier where you can buy your boat ticket to Puerto Galera.

If you don’t take a bus that goes via the skyway, then prepare for a long, very long ride as traffic in Manila is as epic as you have read about. It’s not uncommon for people to sit in traffic for several hours to go as short of distances at 10km.

The JAM buses are large, comfortable coach buses with air conditioning. They will have a large TV in the front playing movies or music videos, which makes the 1.5-2 hours bus ride to Batangas go by very quickly.

Make sure you have cash, exact change is not necessary but apprieciated, and pay the conductor when he comes around and hands you a ticket. At the time of publishing this, we paid P167 per person ($3.71USD) for a one way bus ticket from Buendia bus station to Batangas Pier via the skyway.

Once you arrive at the Batangas Pier, exit the bus and head towards the ferry terminal. You will be dropped off in the parking lot and there will be lots of touts.

They are harmless, but do not let them touch your bags or carry anything for you unless you plan to dish out money. Also, do not buy tickets from them despite the fact that they will attempt to sell you ferry tickets.

They will also tell you the terminal is closed, this is not true. Just say ‘no thanks’ and keep walking towards the terminal. 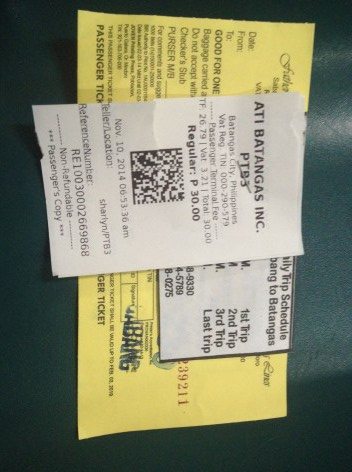 There will be security guards that will direct you through a series of roped off walk ways until you reach the front of the terminal building. Outside there are several kiosks of companies selling ferry tickets.

You need to purchase your ferry ticket at one of these kiosks. It is up to you which company you use, they are all the same, but be aware that not all of them go to all the drop points on Puerto Galera.

When we arrived, there was only one company open that was going to Sabang Beach, so we bought our tickets from them, P270 per person one way ($6USD), including the mandatory environmental fee that they included in the ticket price. Be sure that you get that extra stub showing you paid that fee, ours was attached to our ticket. 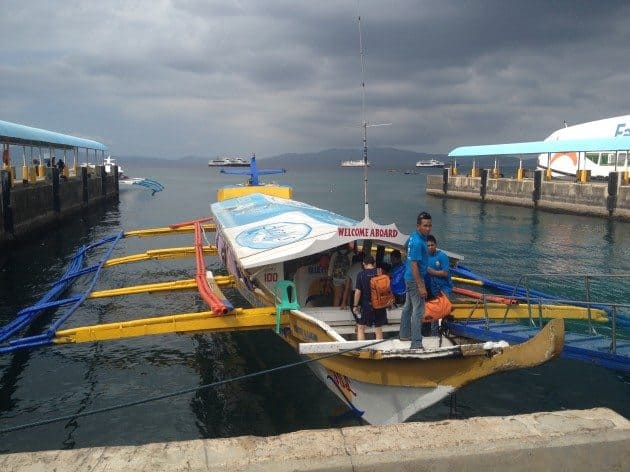 Inside the terminal just find your gate and wait to be called for boarding. When called, you’ll hop onto a traditional Filipino Banca boat and be on your way.  The boat ride takes 1.5 hours from Batangas Pier to Sabang Beach.

Once you arrive, you’ll find that everything is within walking distance with lots of options to stay and eat during your stay.

As I mentioned earlier, the waters off of Puerto Galera are easily included in the top 5 diving places in the Philippines. Get in the water, whether you scuba dive or snorkel, and enjoy the beautiful marine life and reefs that you can find here.

Most of the diving can even be done right off the beach. It’s an incredible destination, easy to get to and a really nice break from the chaos in Manila. 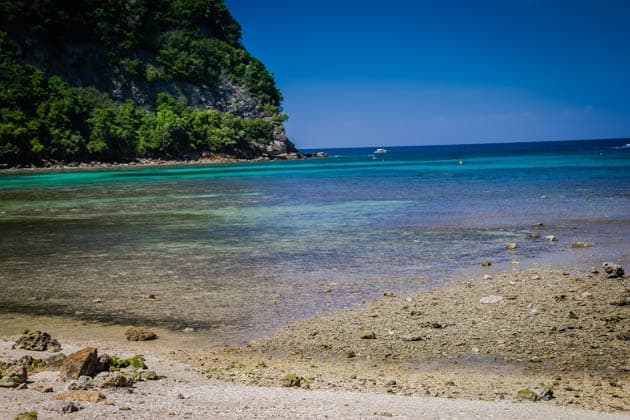